Groundhog Day is Tuesday, February 2nd. This celebration has European roots known as Candlemas Day, a Christian holiday. In Germany, according to folklore, if a hedgehog saw it’s shadow on Candlemas Day there would be a second winter or six more weeks of bad weather. When German’s began to settle in the United States, their folklore also came with them, but due to an absence of wild hedgehogs in the United States a new hibernating animal needed to be selected. A groundhog was the lucky winner! 1886 marks when the first newspaper reported about Groundhog Day in the United States. While this celebration has lost its original roots, it has become a very popular celebration (mostly to break-up the dullness of winter) around the world. The official location of Groundhog Day is in Punxsutawney, Pennsylvania. Hence the name for the groundhog, Punxsutawney Phil.

To help celebrate this fun tradition we have created a paper sack puppet for you follow along with and make yourself. Once completed share with us if your groundhog saw its shadow or not! Will it be six more weeks of winter or an early spring?!

Make your own Groundhog Puppet 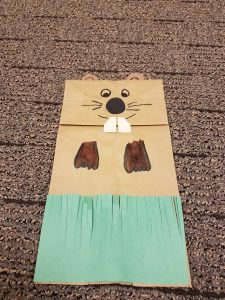 Grab some supplies and lets get crafting! For this puppet you will need: 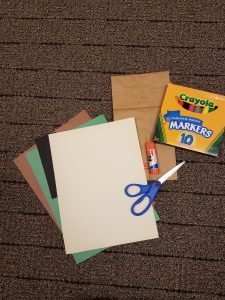 Make sure your paper bag is orientated so that the flap of the bag is at the top and facing you. (Like pictured)

Once you have the paper cut to make “fringe” or grass. You will then glue that onto your paper bag. 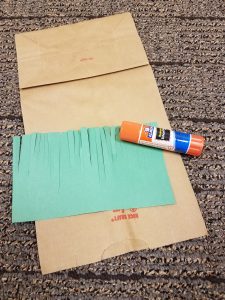 Now taking your black paper cut out a circle for the nose. Then take your white paper and cut out teeth for your groundhog. Once those are cut you will glue the nose onto the center of the flap. To glue the teeth put glue only on the top half of the teeth, leaving the bottom half glue free so it hangs off the bottom of the flap edge. This will keep it so your puppet’s mouth can open! 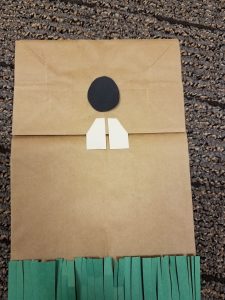 Step Four: Taking the brown paper, cut two half circles. These are your groundhog ears! You will glue them on the backside of the puppet.

Step Five: Now taking your markers finish off the face and add some arms. Draw on some eyes, whiskers, smile, and some arms. 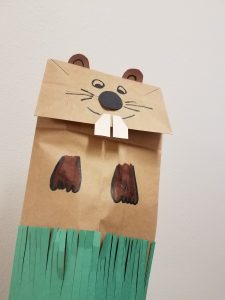 You now have a happy groundhog! Take it outside and see if it creates a shadow. If you see a shadow, six more weeks of winter. If not, an early spring we will have. What’s your prediction?!